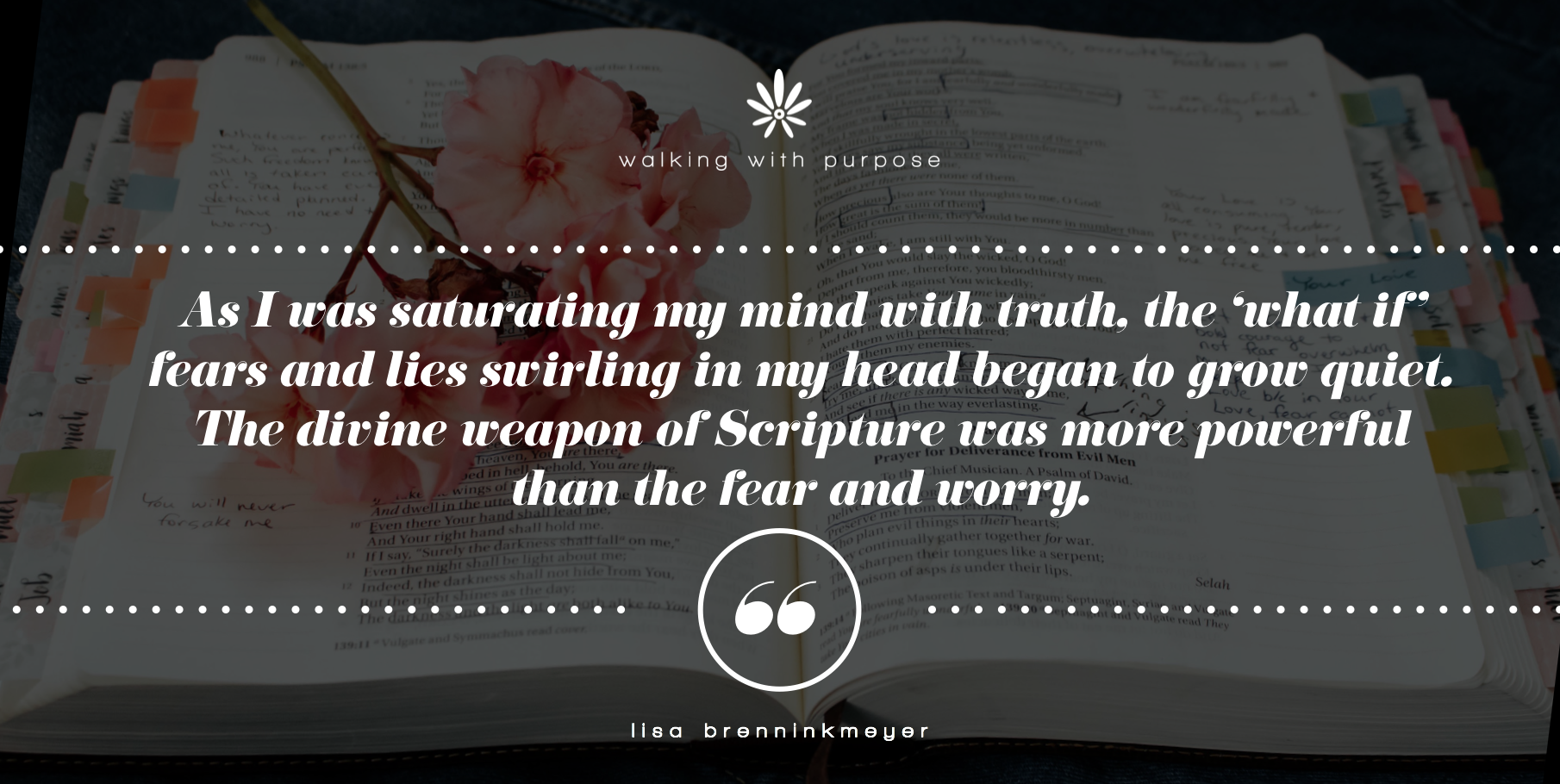 It's been said that worry is a misuse of the imagination. This resonates with me, probably because of my award-worthy ability to come up with worse-case scenarios and potential catastrophes.

The Wrestling, the second part of Fearless and Free, is all about getting a grip on your emotions and thought life. Writing it didn't come easy. There's no pontificating in those pages because I am 100% a work in progress. But I have found that God's words are life to those who find them, and they bring healing. I know this, beyond a doubt, from my own experience.

During a seemingly endless season when I walked alongside my child who was in a very dark place emotionally, fear had a grip on my heart and mind that was utterly paralyzing. No amount of praying got rid of it. It helped, but it didn't cause my mind to stop the endless loop of worry. I'd be praying, and all of a sudden I'd be worrying, and the next thing I knew I'd have wandered into a different room of my house without any idea why. There was no rest.

During this time, my dad bought me a little book called Praying Circles Around Your Children by Mark Batterson. In it, the story is told of a father who decided to pray every word of Scripture over his son's life. I committed to doing the same. I bought a new Bible, and began to read, underlining every verse with a promise to claim for my child. Then I wrote out a prayer claiming that promise in the margin. If there was an example to follow, I prayed for that. If there was an example of the opposite of what I wanted to see, I wrote down my prayer about that. Verse after verse, chapter after chapter, book after book, the Bible became filled with prayers for my child.

There is something incredibly powerful about praying God's words back to Him. We can be assured that we are praying within His will. A few months into this intense time of prayer, I saw the tide beginning to turn in my child's life. I do not believe this was a coincidence.

Something else happened at the same time. My heart calmed. The hours I spent reading Scripture were releasing heavenly power, divine weapons, to be at work in my child's life. But because Scripture is living and active, it was also doing a transforming work in my own heart. As I was saturating my mind with truth, the “what if” fears and lies swirling in my head began to grow quiet. The divine weapon of Scripture was more powerful than the fear and worry.

Another way we can wield the weapon of Scripture is by quoting it out loud. The enemy can hear us. When we speak out self-defeating thoughts and worries, he hears them. He stores them away for later use. He uses them against us later, and they ring true to us on some level because they were our thoughts and words to begin with.

So instead of speaking defeat, fear and worry, we can choose to speak truth. I call this the “I Declares.” I wrote them for various sources of struggle- fear of the future, pain from the past, suffering, and marriage. You'll find them within the pages of Fearless and Free, but I'd like to share the “I Declares” I speak the most often- the ones I battle with for the hearts of my children.

I declare that you who began a good work in my child will bring it to completion. (Phil. 1:6)

I declare that you can reach down from on high and take hold of my child, drawing him out of deep waters. (2 Samuel 22:17)

I declare that my work as a mother will be rewarded and that my child will come back from the land of the enemy. (Jer. 31:16)

I declare that there is hope in my future and in my child's future, and that my child will come back to her own border. (Jer. 31:17)

I declare that you are able to accomplish abundantly more than all I could ask or imagine.(Eph. 3:20)

If you want to mature as a Christian, if you are tired of being tossed by waves and swept along by lies and worries, then grab hold of your Bible. Anchor yourself with the truths found in its pages. Go to it with the passion of a lover who longs to hear the voice of her Beloved. I promise you; the One who is called Faithful and True will meet you there, and He will never disappoint.