At Walking with Purpose

When I was twenty-three years old, I walked out of Mass almost in tears. “I can’t stay here,” I thought to myself. “They don’t know Jesus; they don’t know scripture; heck, they don’t even seem to know each other.” I was raised Catholic, but it wasn’t until I darkened the door of a non-denominational church that I met Jesus Christ in a way that transformed the very core of my being. For years, I held bitterness toward Catholicism, feeling like I had never learned the true gospel in Mass on Sundays. My experience in the Church, though better than many, was all I had to work with, and it wasn’t enough.

Determined to leave, I started researching the Catholic faith so that I would know what I was leaving. Big mistake. Over the course of six months, I discovered the hidden treasures of Catholicism. Realizing how wrong I was, I returned wholeheartedly and gave my life to Jesus and His Church. It was the best decision of my life.

At least half of my story is THE story of most millenials who were raised Catholic. Millions grew up in Catholic families and attended Mass, but their lackluster experience with what they perceived as a stale religion sent them running for the door. We were in search of greener pastures. The difference between my story and theirs is that most of them did not discover the true beauty of Catholicism. They left and have not come back.

It is these men and women, my generation, that inspired me to write 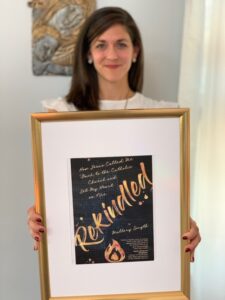 Rekindled: How Jesus Christ Brought Me Back to the Catholic Church and Set My Heart on Fire, which will be released on November 6. For at least the past three generations, our everyday experience of Catholicism has done a disservice to the faith that we profess and the people who are supposed to profess it. I have watched my generation bleed out of the Church, and since I was one of them, I don’t blame them. There is a significant gap between the beauty that awaits us in the teachings of Catholicism and the daily experience of the average Catholic. This book is all that I want to say to the countless men and women who have sat with me and told me their reasons for leaving, and for all the parents that I know who mourn that their children no longer practice the faith. It’s the expression of my heart as it aches for so many of my friends to return to the Church and discover the joy and meaning for which they search, and it starts with the message, “I get it.”

In each chapter, I share honestly about my own experience growing up Catholic, which I believe is a common experience. We have all experienced bad Masses, grappled with the scandals of our clergy, and struggled with insufficient knowledge about what we believe in the first place. My hope is to provide an account that validates the pain and doubt that so many Catholics and former Catholics feel.

Here in these pages, I cover nine reasons that many Catholics have left, explaining what I experienced, what I learned, and why I stayed. This is not a book that is meant to bash the Church, although I do not sugarcoat any of the problems plaguing Catholicism today. I talk about them openly, hopefully even with a sense of humor, as I believe that every Western Catholic alive will be able to relate to the issues in at least one, if not all, of the chapters. After discussing these issues, I share what it was that led me to fall in love with being Catholic.

Hidden under the mess of it all, there are infinite reasons to embrace Jesus Christ, His Church, and His mission. I seek to bring them to light. I believe all of the reasons eventually boil down to this: Christianity is the Truth but Catholicism is the fullness of the Truth. The Church offers us a way of life that, if followed, will lead us to a life of freedom that lands us at the feet of our King, Jesus. All the history, the traditions, the prayers, and, most importantly, the sacraments lead us to the God for whom we were made. There is more here than meets the eye. While there is much work to be done, it would be a shame for those of us who were raised in the Church to miss the jewel that has been right in front of us all along.

Have you ever grappled with your experience as a Catholic? Do you have a loved one, a son, or a daughter who has left this Church that you love so much? Are you struggling with Catholicism yourself or have one foot out the door? I invite you to walk with me through each chapter. Let my story illuminate your own, strengthen your faith, and lead you even more deeply into the heart of Jesus and His broken and beautiful Church.

Preorder Rekindled for yourself or for a loved one, and rediscover this ancient, surprising beauty with me on November 6.